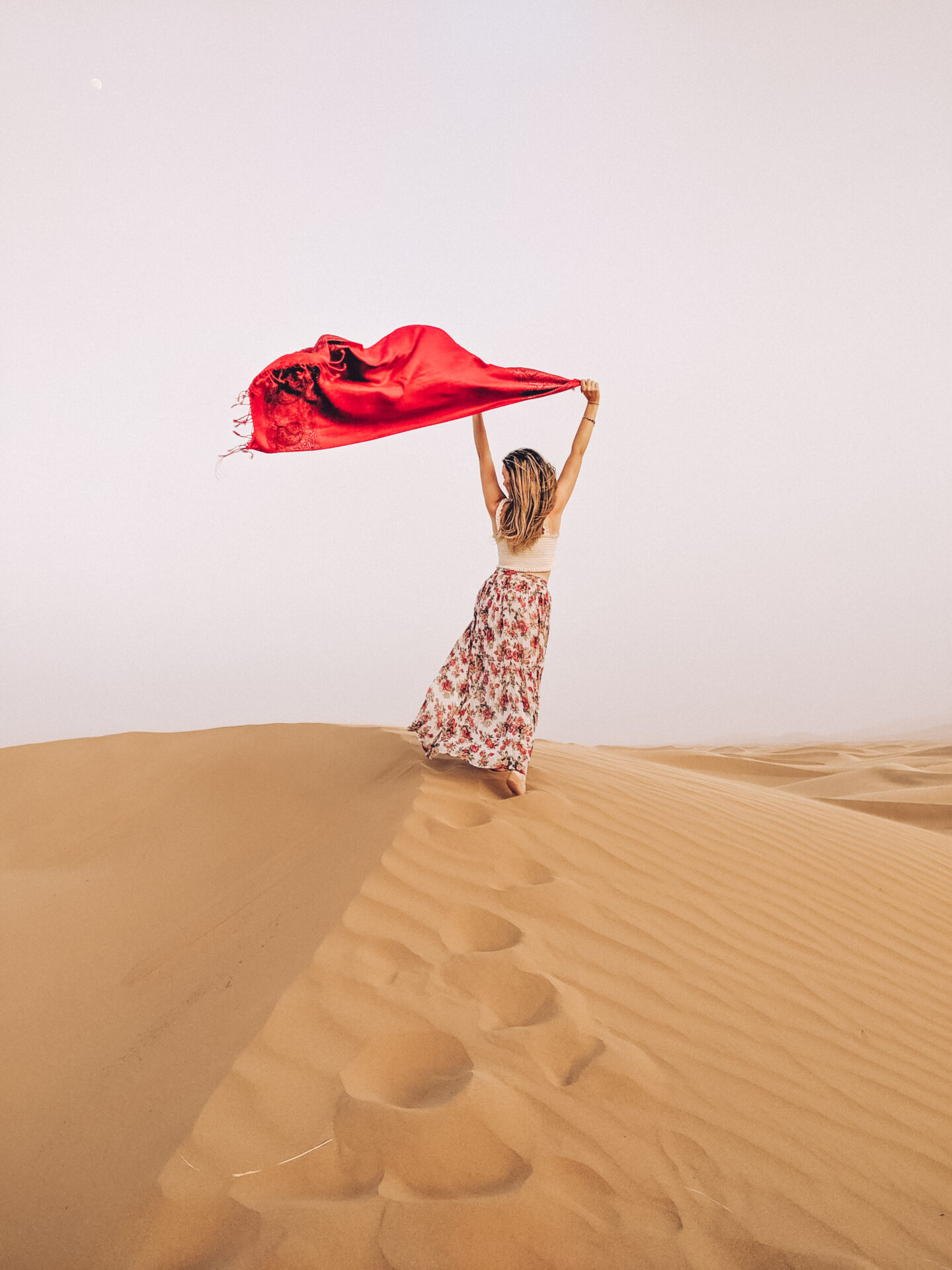 Camping in the Sahara Desert has been on my bucket list for a while, so when I headed to Morocco earlier this year, it was one of the first things we booked.  After a lot of research, we decided to go with Morocco Desert Tour, for their 3 day ‘Marrakech to Fes’ tour.

We were picked up in a 4WD Toyota Land Cruiser from our beautiful riad; Riad Yasmine, which you can read more about here, at around 8:00am by the lovely Toufiq. I’d highly recommend asking for Toufiq when you book.  He had a lot of knowledge about the sites we visited, spoke excellent English, and made sure we had everything we needed.

Leaving the bustling markets of Marrakech behind, we entered the magnificent natural wonder of the Atlas Mountains via the Tichka Pass (the highest road pass in Morocco).  We had visited the Atlas Mountains a day earlier, where we hiked and visited Berber villages, so we didn’t spend too long here, but we did stop off at multiple viewpoints for some photo opportunities.

Our next stop was the UNESCO World Heritage site; Ait Ben Haddou, and is a must-see on your journey to the desert.  Many films including ‘The Mummy’ and ‘Gladiator’ have been filmed here, and four families still live in this ancient village! We spent about an hour walking around the kasbah, and hiked to the top for some more incredible views.

We continued through the Skoura Oasis and on to the Rose Valley where most of Morocco’s rose products are created. After a long drive, we arrived at our riad for the evening, situated in a small Berber village in the Dades Gorge. We had dinner, and then headed out to explore the village, where we ended up playing football with a few of the local children. This was a highlight for us, as it was one of those authentic interactions you wouldn’t get elsewhere.

After a much needed night’s sleep, and a traditional Moroccan breakfast, we were back on the road.  We stopped off at the stunning Todra Gorge; a natural oasis in one of the world’s most spectacular canyons.

We paused for lunch in a small town called Merzouga and continued our drive into the desert.  As the hours passed, the landscape changed around us. We drove through miles of barren arid plains, until eventually, we spotted the peaks of sandy dunes ahead of us.  We had entered the gates to the Sahara!

We were dropped off at the base of the dunes, where we boarded our camels, for our 45 minute trek to our desert camp.  The camels were well looked after and were free roaming, which was nice to see. During the trek, there is the ability to stop for photos and watch the sun set behind the golden dunes.  It was a beautiful sight, and a lot of fun being able to play around on the dunes themselves.

I was blown away by the camp.  Situated in the heart of the Sahara, were a gorgeous collection of luxury tents, lit up by lanterns and fairy lights.  It was beautiful. The tents came equipped with two double beds, carpeted floor, full bathrooms, and warm showers. In fact, it was nicer than some of the hotels we stayed in! I’d highly recommend upgrading to the luxury camp.  You get the experience of the Sahara and nomad life, but the comforts of glamping!

The food at the luxury camp is a lot nicer than the basic one.  We had a delicious lamb tagine cooked for us, followed by some traditional Berber entertainment.  The staff played music and taught us some of their childhood songs, which we loved.

The only disappointment was the weather, but you can’t really plan for that. Due to high winds, there was a lot of sand in the atmosphere, making it too hazy to see the stars. We did manage to stargaze in the Atlas Mountains the night before, but we’ll just have to go back again to get the desert star experience!

We woke up just before sunrise, and climbed one of the dunes to watch the sun break over the expansive desert. It was a magical moment! After a delicious and filling breakfast, we packed up our things, and headed back through the desert via a 4×4 jeep for some dune bashing!  I’d recommend removing your valuables from your backpack at this point, as they tie your luggage to the top of the jeep, and Dan’s bag flew off mid bashing!

It was another long drive to our final destination Fes, but we did stop off at a couple of notable sites along the way, including Atlas Studios; the world’s largest film studios.  We grabbed lunch at a gorgeous restaurant overlooking an ancient kasbah, and stopped by Toufiq’s family home for some Moroccan tea.

Although the drives are incredibly long, the car has A/C, and there are multiple stops to break up your journeys.  Plus, I couldn’t complain about the hours spent driving down winding roads, through mountainous valleys, and breathtaking views.

If you’re headed to northern Africa, I highly recommend getting out of the cities for at least one night. This three day tour was the perfect experience, and ideal for those with limited time in Morocco.  If you do have longer, then I’d recommend doing the 4 day excursion, so you have more time in the desert for quad biking and sand boarding.

Disclaimer: We were gifted a complimentary upgrade to the luxury camp in exchange for a post. As always, opinions are my own.