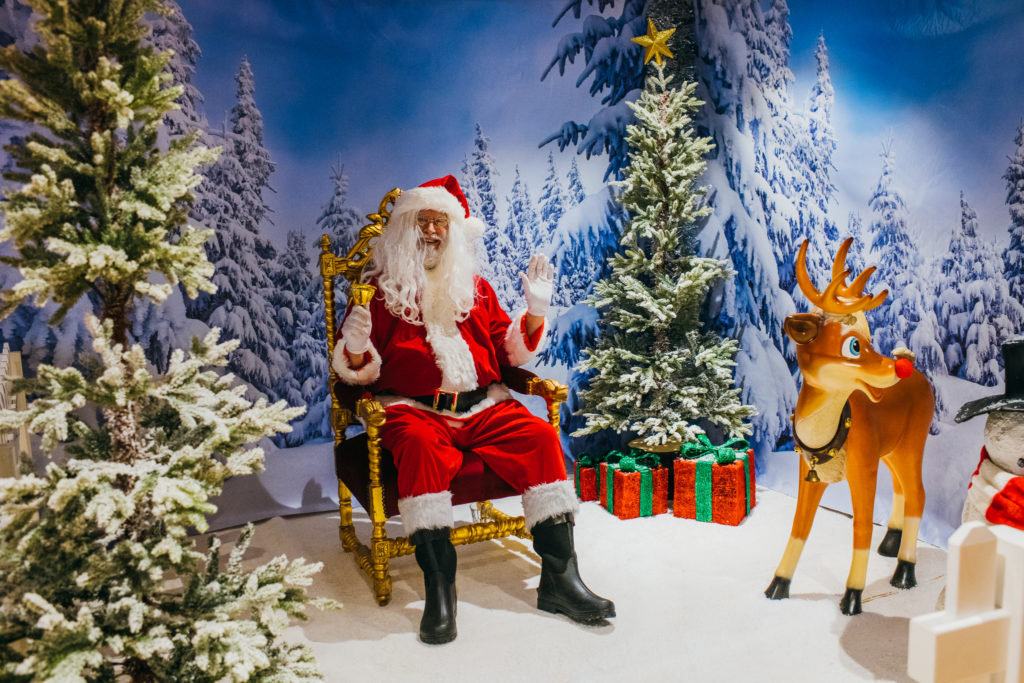 Although it’s still a little early to be mentioning the C word, the festivities in London have begun, with the Oxford Street Christmas lights turning on tonight.  To get in the spirit, Moonpig put on a festive workshop for bloggers and influencers at their Head Quarters, and so I headed down to take part in their event.

Considering 1 in 3 people have sent a Moonpig card in the UK, I’m guessing you’ve probably heard of them.  Moonpig are the UK’s leading online personalised gifting, flower, and card retailer. They have served over 100 million ‘moments’ since they launched in 2000, which works out at an impressive 300 orders a minute!

I almost always send a Moonpig card for a special occasion, as I love the personal touch and customisation, plus, it’s a lot more convenient to send, as you don’t have to buy stamps, or run around London trying to find a post-box.

I arrived with some friends to Moonpig HQ, where an incredible spread of food was waiting for us.  After a presentation from the CEO, we were split into three groups for our festive activities. 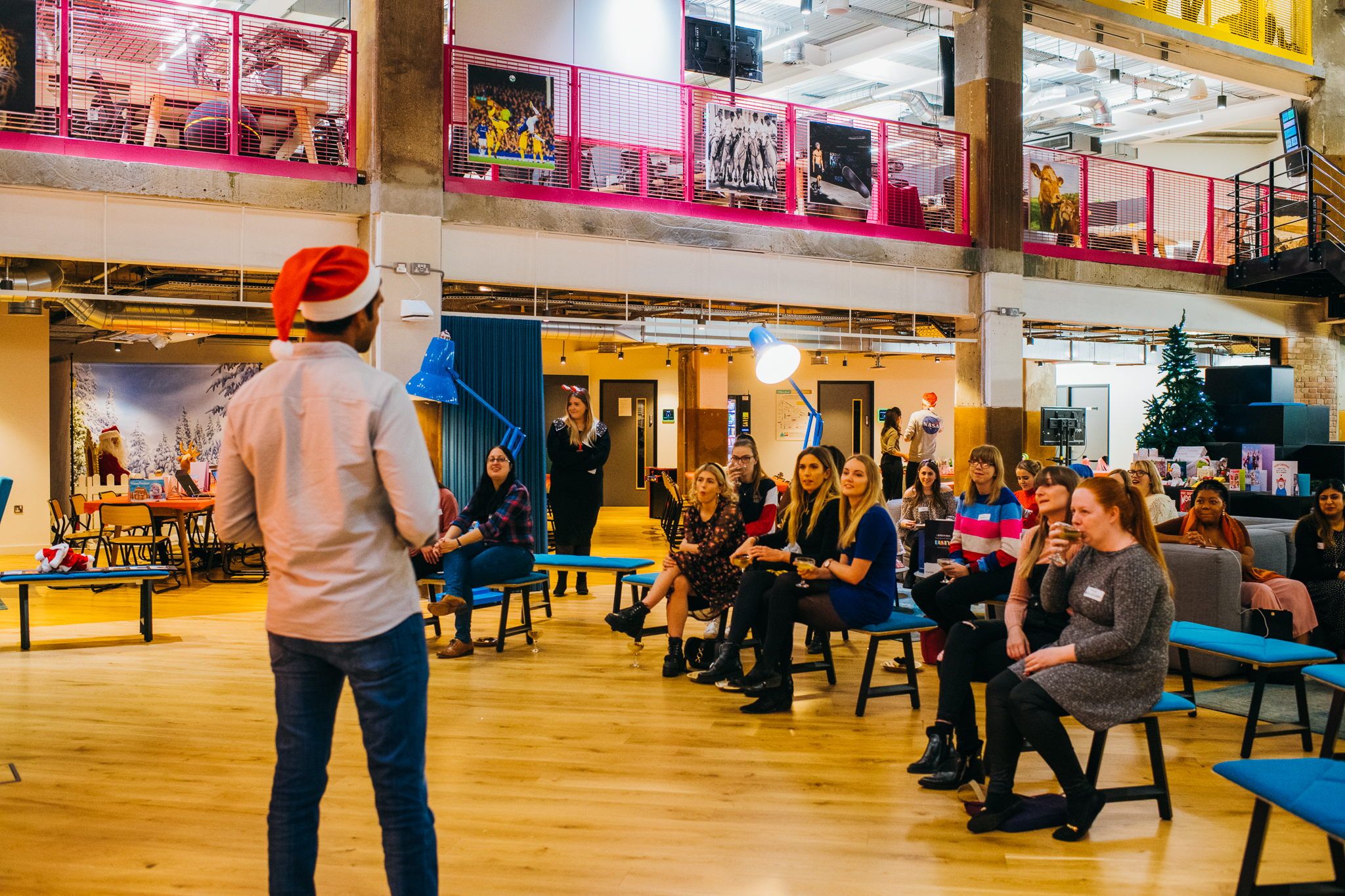 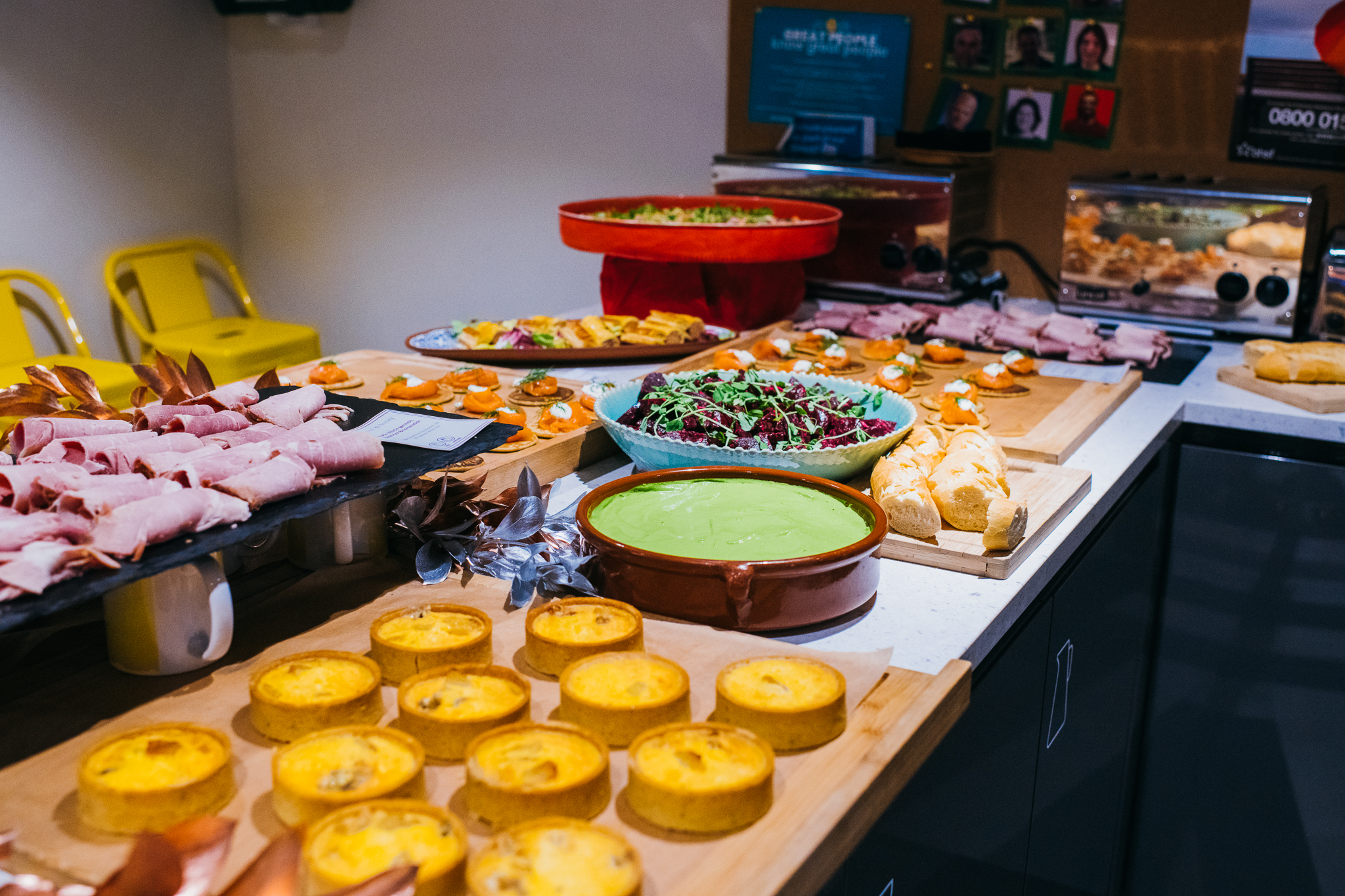 First up was cocktail making. We were taught how to make three different cocktails and pitched against each other for the ultimate cocktail competition of taste, speed, and flair.

The first cocktail we made was a ‘Gingerbread Mojito’, consisting of Rum, mint, lime, gingerbread syrup, and soda.  I’m happy to say my cocktail won the ‘best taste’ out of my team (one of the many skills from being a Geordie), but I was robbed of first prize at the final stage – fuming. 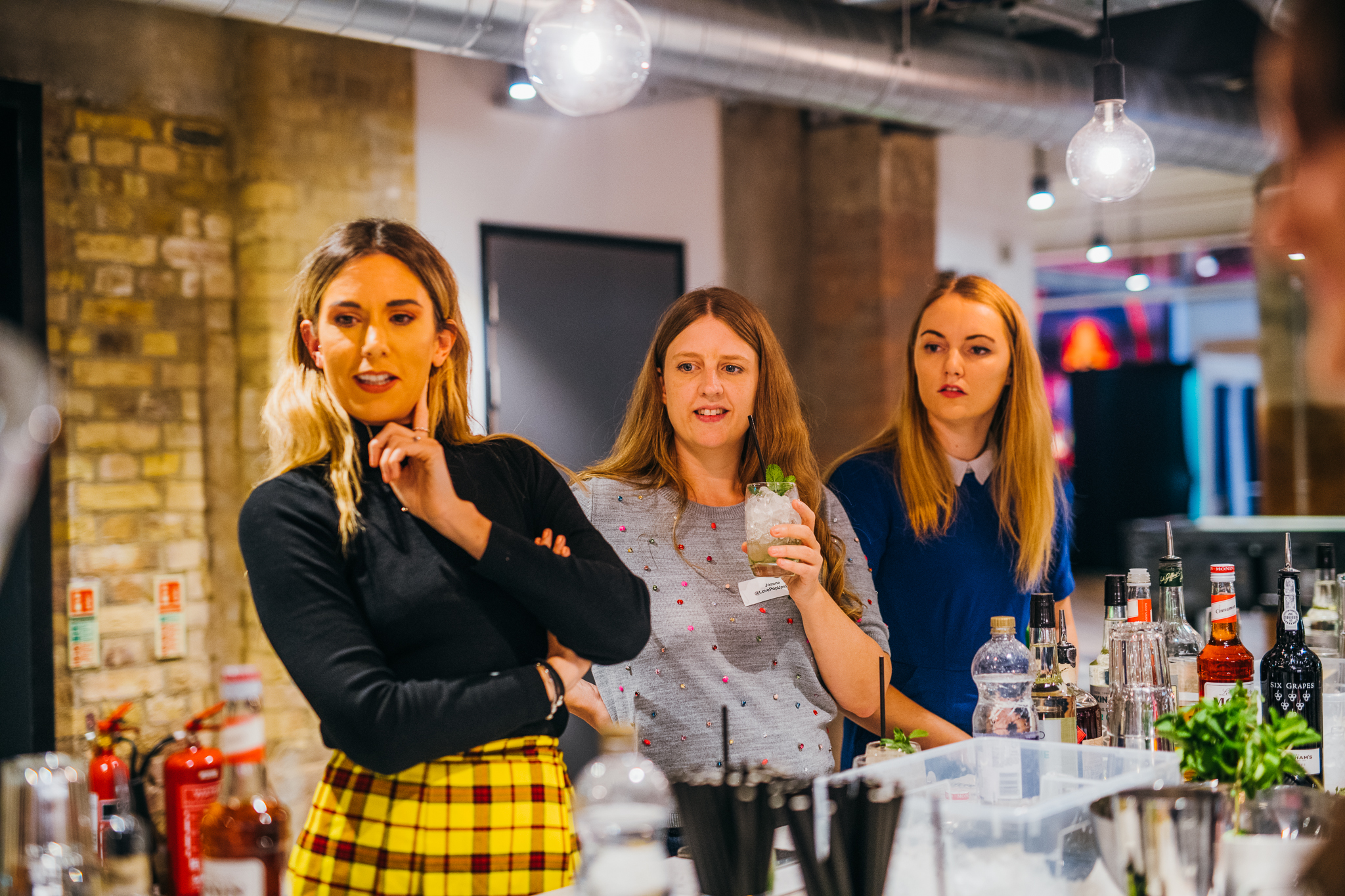 Next up was the ‘speed’ round.  We worked in our teams to race against the clock, to make a Port of Call cocktail (Gin, Port, Cranberry Sauce, and Cinnamon Syrup).  Considering we finished 10 seconds faster than our opposition, you’d have thought we’d have won… that’s if my friend Hannah had known what a strainer is! Instead of holding the strainer against the silver mixing jug, so that the liquid could stream out into the glass, she balanced the strainer on top of the cocktail glass and poured the mix over it, meaning the ice fell out, the drink went everywhere, and we were disqualified. Absolute nightmare! 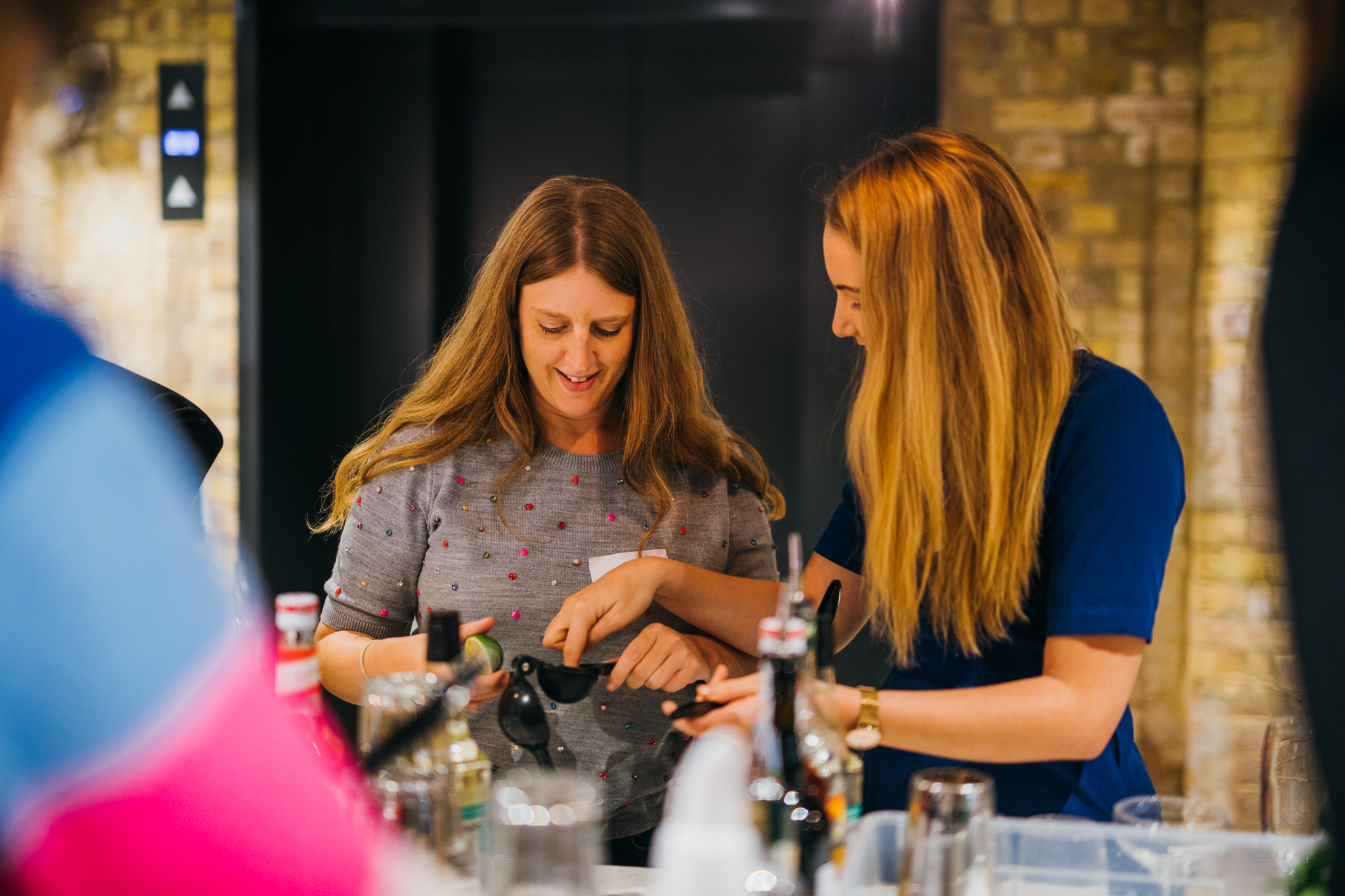 Finally, it was time for the ‘flair’ round. With me trying to juggle the bottles, and Hannah attempting to make a cocktail with her hands tied, this was also an absolute disaster! Safe to say, we won’t be getting a bar job anytime soon.

Moonpig sells all the spirits used for the cocktails above, which you can check out here.

In the corner of the office was a huge photo booth and green screen, where SANTA was waiting to pose for our Christmas photos.  Never one to miss a photo opp, I jumped all over him (see below). I don’t think Santa was as thrilled, considering he shouted “quick” to the photographer as he struggled to lift me, much to the amusement of everyone else. So, apart from the fact Santa hinted I may have put on a little winter weight, it was a lot of fun.

We used one of their laptops to choose from over 10,000 card templates to insert our photograph, and after writing our message and putting in our address, that was our personalised Christmas card made.

If you fancy designing your own personalised card this Christmas (or for another special occasion), then you can check out their templates here.

Our final activity was flower arranging.  We were gifted tulips and roses, which we cut down, along with their foliage, and arranged them beautifully into household jars. We decorated the jars using ribbons and were able to take them home, where they now sit positioned around my living room.

Moonpig Flowers can be selected based on the occasion and come with cute little extras such as a vase or bottle of bubbly. You can also choose “letterbox” flowers, which are the ones we used at the event.  As the name suggests, the letterbox flowers come in a long thin box that fit through your letterbox, for you to arrange yourself.

You can check out Moonpig’s flower selection here. 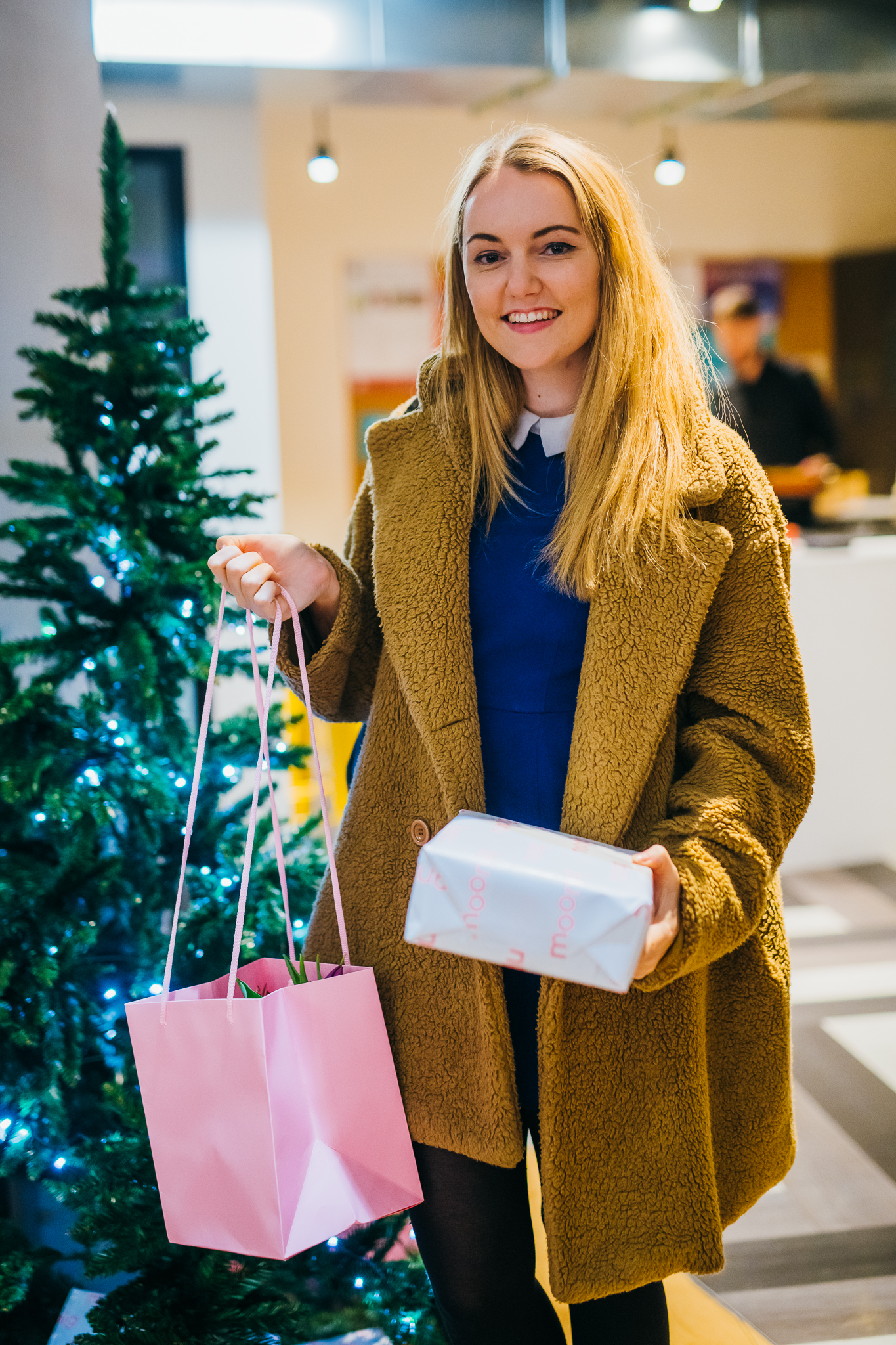 Thanks again to Moonpig for a great event and my Christmas present (which will be my first present under the tree this year).  I’d always recommend using Moonpig for a card or a gift, or both.

Like they said in their presentation, ‘it has never been more convenient to make someone feel special.’

Disclaimer*
This was an invite-only blogger & influencer event, where we received complimentary activities, food, and drinks, in exchange for a post. Views are my own.