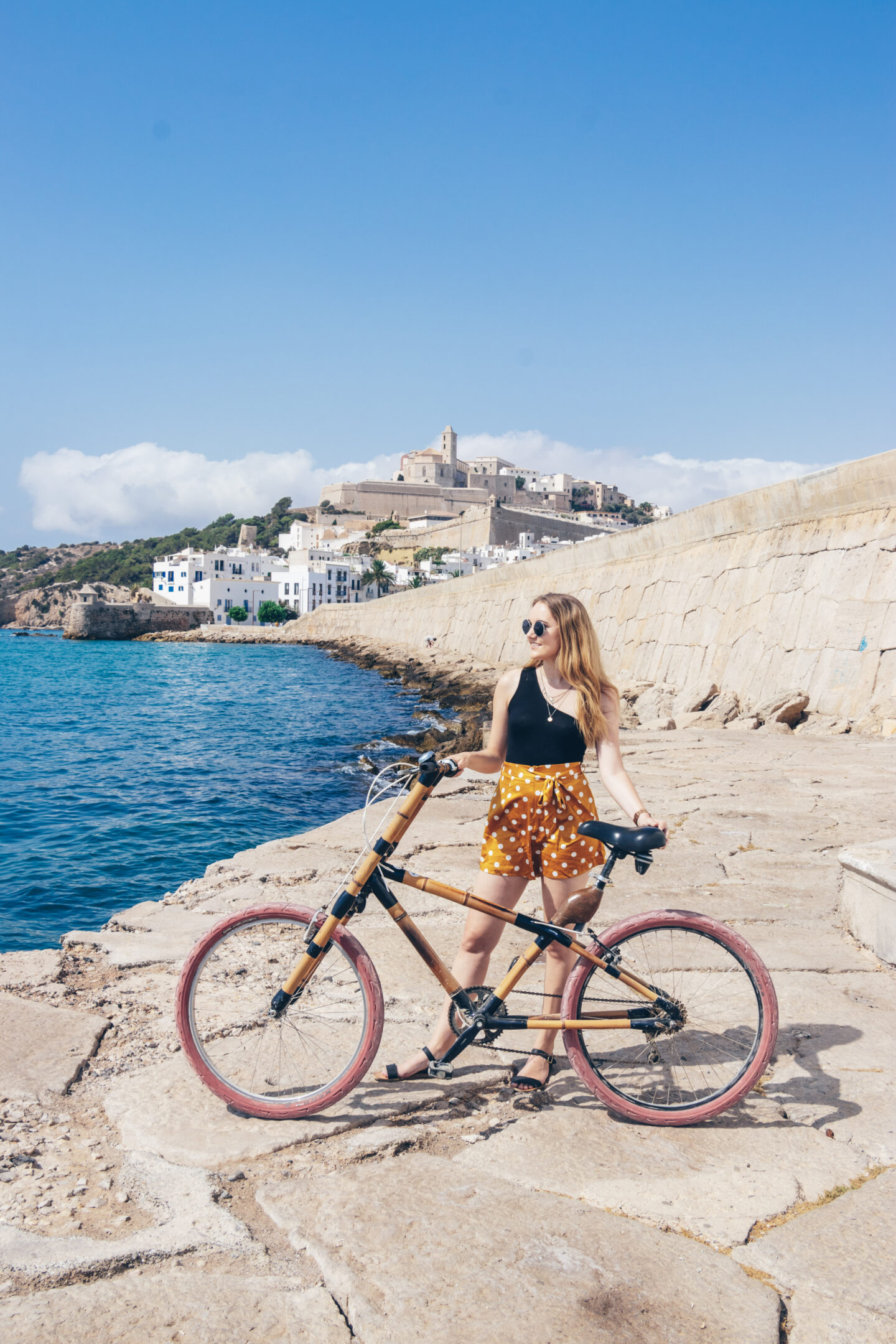 Ibiza has a lot more to offer than just nightclubs. It’s an island rich in biodiversity, with a very interesting story. So, in between partying, why not spend a day learning about the history and culture that shapes this beautiful island. A great opportunity to do just that, is a visit to Ibiza’s Old Town.  I booked a 2-hour excursion with Bamboo Bike Tours when I visited last summer.

Availability: Every day upon reservation

I arrived at Bamboo Bike Tours at 10:30am for a private morning tour with my guide Stephan. Stephan was super knowledgeable and a lot of fun during the trip.  He taught me a lot about the city and I left feeling more connected to the island which I think is important when you’re travelling to a place.

The bikes are made out of bamboo, offering a more comfortable ride, as well as being a lot more sustainable.  Did you know bamboo reduces the energy use during the bike production process to just 10%? So, not only is this a great way to see the city, but you can feel good about yourself too!

Our first stop was Vara de Rey, a beautiful square in one of the most affluent areas of the Old Town. The architecture of the buildings resembled that of Cuba, and there’s a reason for that.  Buckle up for your first history lesson of the day.

Despite losing the battle, the news of the heroic behaviour of Vara de Rey and his men spread to Ibiza. The square was named after him, and a monument put up in memory.

One of the survivors from the battle, was an architect and continued living in Cuba for many years after the war. When he arrived back in Ibiza to help rebuild the city, he was inspired by the cuban architecture, which is why we see influences of it today.

Next, we stopped by the fortified town of Dalt Vila; once one of the most important coastal cities in the Mediterranean.  Once you’ve entered into the old city walls, be sure to stop by Plaza de Vila, where you will find lots of quirky restaurants, art galleries, and handcrafted goods.  Once you’ve finished the tour, I’d suggest climbing to the summit to take advantage of the stunning panoramic views over the harbour.

Continuing our journey around the old town, we headed for the coast, where we had a beautiful relaxing cycle along the Parc de la Pau seafront.  We paused for some photo opportunities and took in the stunning scenery and surroundings. It’s here I learnt the secret to Ibiza’s beauty. Time for a quick science lesson!

Ibiza is known for its clear crystal waters and beautiful turquoise bays.  Turns out, it’s the seagrass Posidonia we need to thank. Posidonia lives on the sea bed and is green in colour.  When blue light waves reflect off the water, the colour combines with the green Posidonia, giving the stunning turquoise pigment we see around the island.

Next on the list was the Hippy Quadrant.  The scene in Ibiza has changed dramatically over the decades.  Now known for its deep house and rave scene, back in the 60’s it was a different story. A statue of two hippies, resembling a photo taken in Amsterdam, pays tribute to the importance of the hippie movement during the development of the island.  It comes with its own very sweet story (history lesson 2 coming up!).

The monument shows an adult male, with long hair, and hippie aesthetic, walking with his little daughter.  The mystery of the statue was solved a few years ago when a woman went on a trip to Ibiza and saw the statue, instantly recognising it from an old photograph she had.  Turns out, it was herself and her father from 30 years ago! What are the chances?! Her father, now in his 70’s flew back to Ibiza to see the monument he never knew he had.

Our final stop was the picturesque bay of Talamanca. The beach here is long and wide, the sand gorgeously white, and is one of the more tame beaches on the island. Nevertheless, there are still plenty of things going on here including snorkelling, watersports, and a variety of restaurants and bars.

So next time you’re in Ibiza, why not head to Bamboo Bike Tours, and explore the history of the town in a fun and sustainable way.

Disclaimer: I received a complimentary tour in exchange for a review. All opinions are my own.