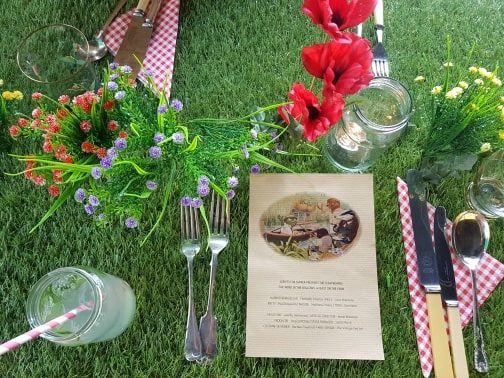 Another immersive supper club has popped up in London, and it is one that deserves a visit! I was invited by the team at LovePopUpsLondon to review Scripts for Supper’s latest venture ‘The Wind in the Willows’, held on Stepney Bank City Farm.

WHAT IS SCRIPTS FOR SUPPER

Scripts for Supper creates brand new adaptations of classic stories, and serves them alongside a bespoke menu inspired by the world of play.  They began creating their divine dinners in 2017, and have now grown to become a 5 star sell out immersive dining experience.  Their experiences fuse together great food and theatre, to take diners on both a culinary and theatrical journey.

Annie McKenzie, semi-finalist from Masterchef 2016 is the artistic director behind Scripts for Supper, where food and theatre collide, and the actors double up as waiters.

I headed along with my friend Ana and together we arrived at Stepney City Farm.  Initially, I was a little sceptical about the location, but after a while I grew to love it, and found it incredibly fitting for the story of ‘The Wind in the Willows’.  There was something very authentic about being amongst the animals, whilst reliving the adventures of Mole, Badger, Toad, and Ratty.

The presentation of the dining area was on point, and you could tell a lot of effort had been put into the detail of the design.  Picnic tables were topped with fake grass and flowers, accompanied with vintage style cutlery and crockery.  Although sitting outside, the tables are sheltered, meaning the experience wouldn’t be ruined by the weather.

With Masterchef semi-finalist Juanita Hennessey cooking up the menu, I expected the food to be of high quality.  As always, I am very honest about my reviews, so believe me when I say the food was incredible! Every single dish was beautifully presented, exquisitely cooked, and perfectly portioned. We arrived a little late so we missed out on the appetizers which were canapes of bubble & squeak pasties and green sauce, so I would advise getting there early to avoid disappointment.

So what did we have?

Upon arrival, we were greeted with a gin cocktail with homemade lemon fizz and bubbles, as we took our seats at our picnic table.  Our first course was a creamy and flavoursome watercress and pea soup, with asparagus and chives. 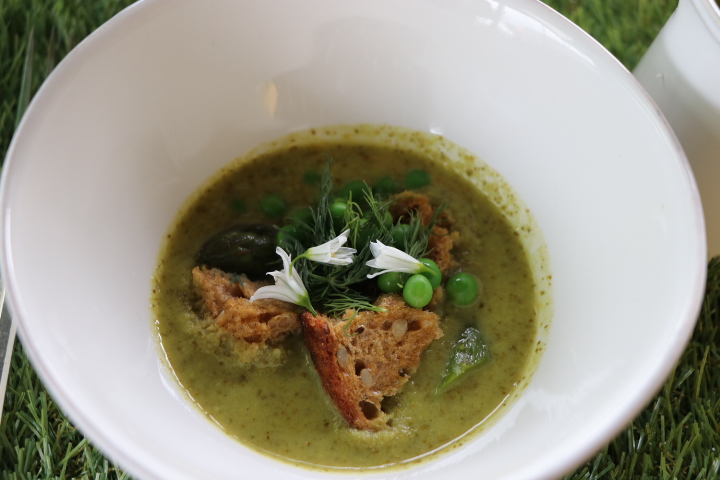 Moving on to our second course, we had a deliciously tender spring lamb, houmous and herbs on toast, with a judicious sprinkling of sumac.

Third up was my favourite dish of all – a bacon hock and leek crumble, with caraway potatoes and radish salad. 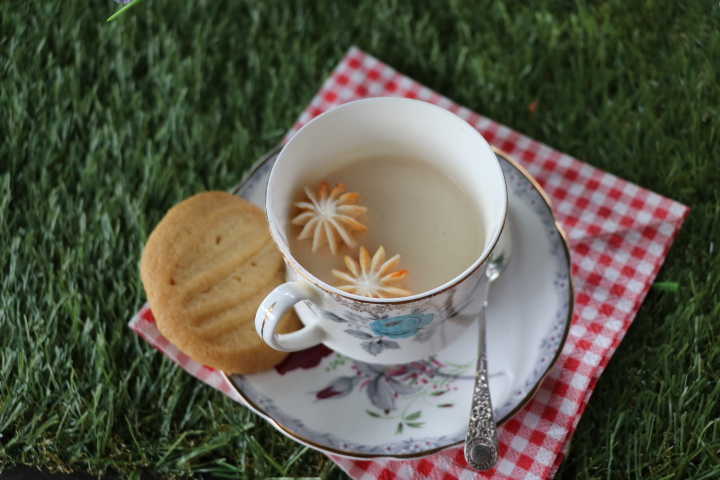 With regards to the arrival of the food, the evening was nicely paced and perfectly timed. The actors performed in between courses, keeping guests entertained while their next dish was being prepared. As each scene ended, the dishes were brought out almost instantaneously.  There were no delays and the service was impeccable.

The production manages to fit the entire story into five short ‘acts’, between which the food is served. The five actors work tirelessly, injecting an infectious energy into the show and demonstrating good musical skills as they act and sing their way around the audience.

There is great versatility found in very simple props such as a wooden crate on wheels which acts as a boat, a car, a dock in a court and a jail cell, amongst other things.

It’s been a long time since I watched The Wind in the Willows (about 15 years), so during the first two acts, I found it a little hard to follow.  However, I decided to google the story during one of the intervals and reminded myself of the plot.  Once I knew the synopsis, I was able to follow the rest of the show, but I would advise reminding yourself of the story before you go.

The actors were full of energy throughout and put on a funny, engaging, and heartfelt performance.  They did a great job of including the audience in the action, an example being where they provided us all with tissue paper and told us to throw it on them when they went through a “blizzard”.   Additionally, although the majority of the production takes place in the centre area, the actors do break off into the audience from time to time, further immersing guests within the story.

I had a very enjoyable afternoon at Scripts for Supper.  The concept is great, the location; fitting, the performances; fun, and the food; exquisite. If you are looking for something different to do on an afternoon or evening, and enjoy a little quirkiness when dining out, then I’d recommend heading along to see what it’s all about. 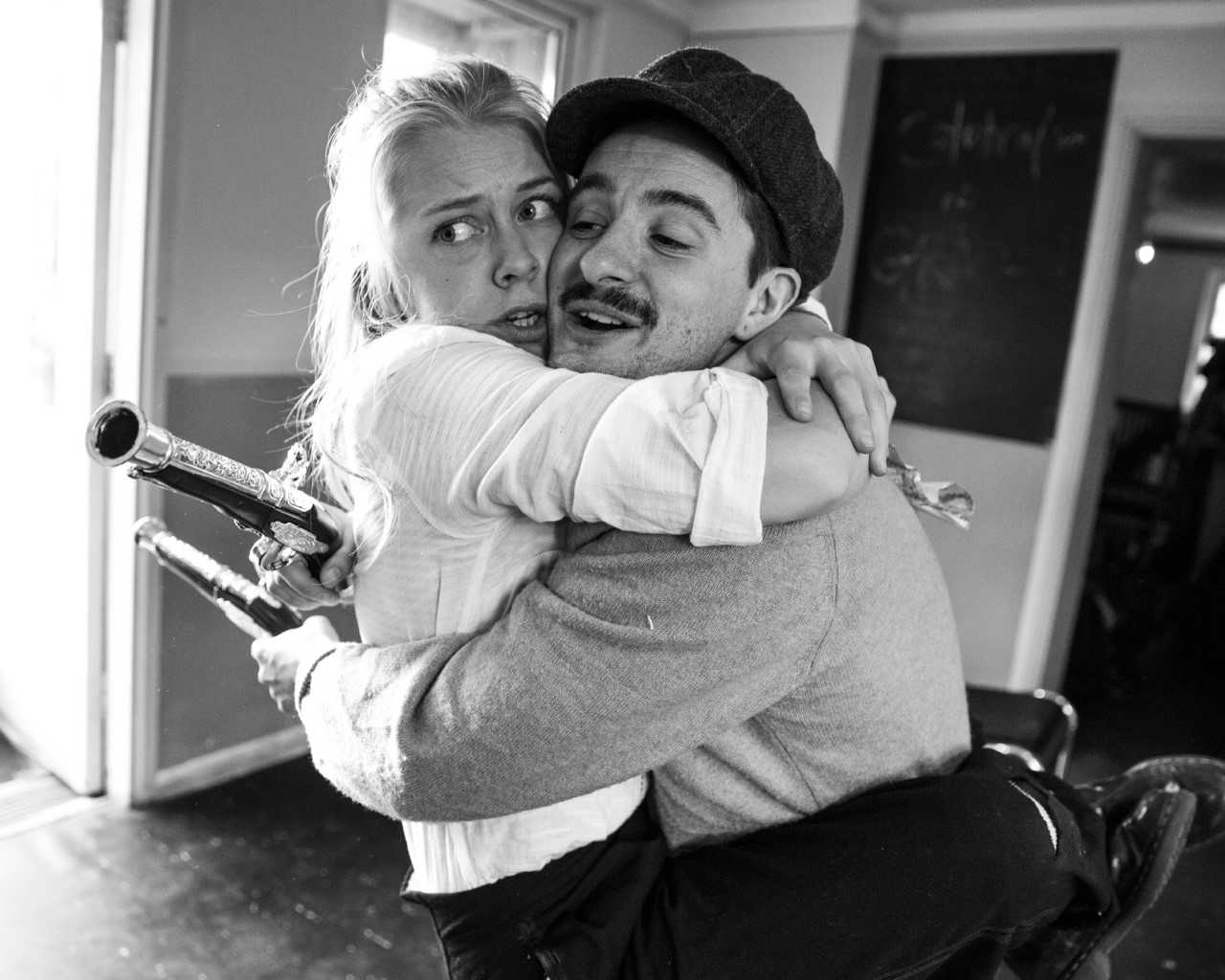 Scripts for Supper is a 150-minute show and runs every day until the 2nd June, with two added performances on 29th and 30th June.  For more info, prices, and to book tickets, please see their website: Scripts for Supper

Disclaimer*
I received a complimentary ticket to Scripts for Supper in exchange for a review. Views are my own.