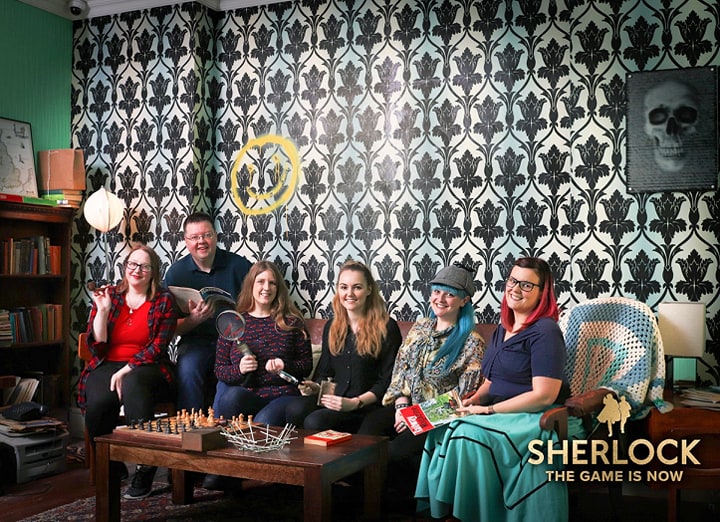 If you’ve been following my posts for a while, you will know I am a lover of escape games.  I love the challenge of completing an array of puzzles, and the competitive spirit of having to beat the clock! I HATE losing… just as well it doesn’t happen very often ?

I was recently invited by the team of Love Pop Ups London to take part in Sherlock: The Game is Now, which you guessed it, is based on the hit BBC TV show ‘Sherlock’.  I guess this is the part where I have to confess…. I’ve never seen an episode of Sherlock.  The thing is, I know I’d like it, as I love all those true-crime documentaries on Netflix, so if anything, this has given me another incentive to finally watch it.

WHAT IS SHERLOCK: THE GAME IS NOW

Produced and designed by the creators of Time Run (which has been my favourite escape game to date), I knew this was going to be another high-quality experience.

My favourite thing about this experience is how much effort has gone into the sets and environments.  It truly feels like you have entered the world of Sherlock as you work together in teams of 4-6 people for 100 minutes, to solve mysteries and puzzles, before time runs out.

The game features original content from the stars of the show including segments from Benedict Cumberbatch, Martin Freeman and Andrew Scott. This adds a personal touch to the experience and gives it that ‘official’ feeling.

We arrived at Doyle’s Opticians, in Shepherds Bush shopping centre for what we were told was ‘an eye appointment’.  This genuinely looks like your normal opticians to passers-by and I wouldn’t be surprised if people tried to book genuine appointments here! As we entered, we were led into the ‘eye test room’, where you read the different sized letters off the board (without my contact lenses in, I can’t even see the top one). As we began reading, we were immediately interrupted, and informed we weren’t here for an eye test after all, but had instead been recruited to join ‘The Network’.

We were told that Moriarty (who I learnt was the bad guy), was behind a number of disturbing incidents going on in the capital, and with Sherlock out of the country, it was up to us to save the nation.

Unlike most escape rooms, this had a huge backstory and an incredible introduction, which set the scene immediately, and fully immersed us all into the story.

Obviously, as always, I cannot give too much away, but I will admit that this was one of the hardest escape rooms I have completed to date. It makes sense considering Sherlock is all about logic and challenging problem solving, so it definitely fits the brief! From creating pathways with pipes, to mathematical problems, map reading, and identifying the dead; it tests all abilities, and illustrates the effort put into each puzzle.

The first room we seemed to breeze past pretty quickly, although there was some slight confusion over one of the puzzles.  All I will say is that one problem is physical, so don’t waste time looking for a clue.  Follow your instinct!

The last room was my favourite as it is a combination of lots of little problem-solving challenges.  It allows the team to split up and work on things simultaneously, as well as going to a puzzle that suits their skills more.

There is no timer visible throughout the game, which I think would be good to have, as we had no idea how well we were doing.  As we finished the last puzzles and dashed out of the final door, our time was revealed. We managed to escape with only 47 seconds left on the clock! That’s the closest I’ve ever cut it in an escape room, but then again, Sherlock always leaves saving the world till the last minute!

After a mentally exhausting hour, we needed a drink.  Luckily, the venue now has a post-escape pub called ‘The Mind Palace’ where you can sit and relax with some food and drinks.

You do not have to have watched the original Sherlock TV series to play.  All you need to join the Network are sharp eyes, keen wits, and a hunger for adventure! I’d definitely recommend giving it a go for escape room enthusiasts.

For more info on prices and how to book, please see their website: Sherlock: The Game is Now

Disclaimer*
I received complimentary tickets in exchange for a review. Views are my own.