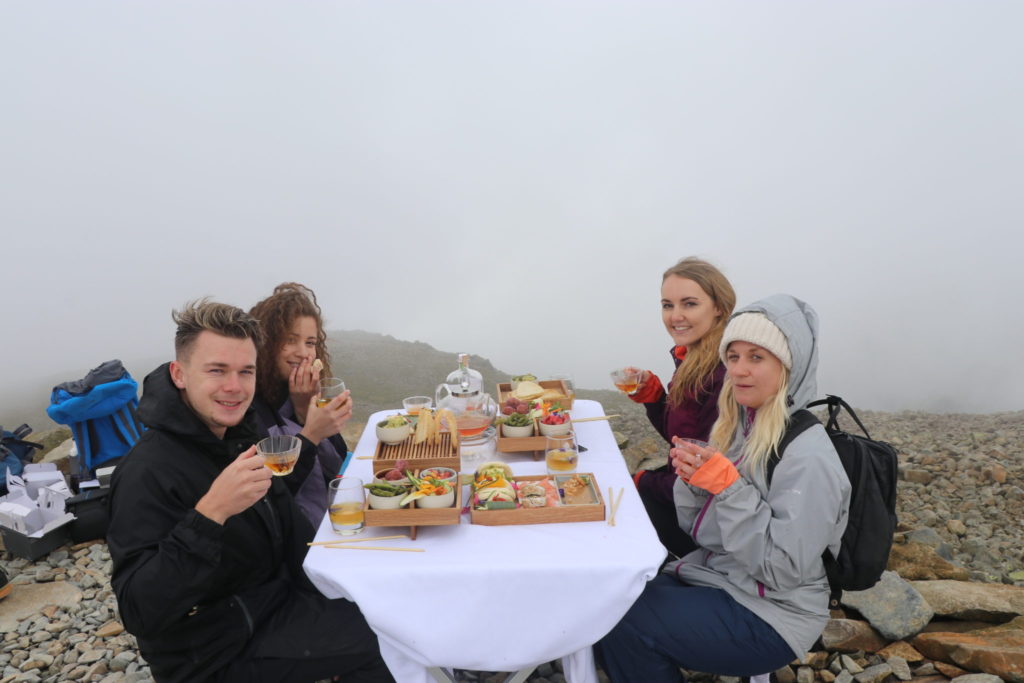 I’ve been very excited to reveal exactly how I celebrated it, but first, here are some fun facts about this quintessential British tradition:

Afternoon Tea Week was established in the 1840’s when Anna, the 7th Duchess of Bedford is said to have complained of having that ‘sinking feeling’ during the late afternoon.  The solution for the Duchess was a pot of tea and a light snack.  She later began inviting friends to join her, and as other social hostesses began to pick up on the idea, afternoon tea was born. 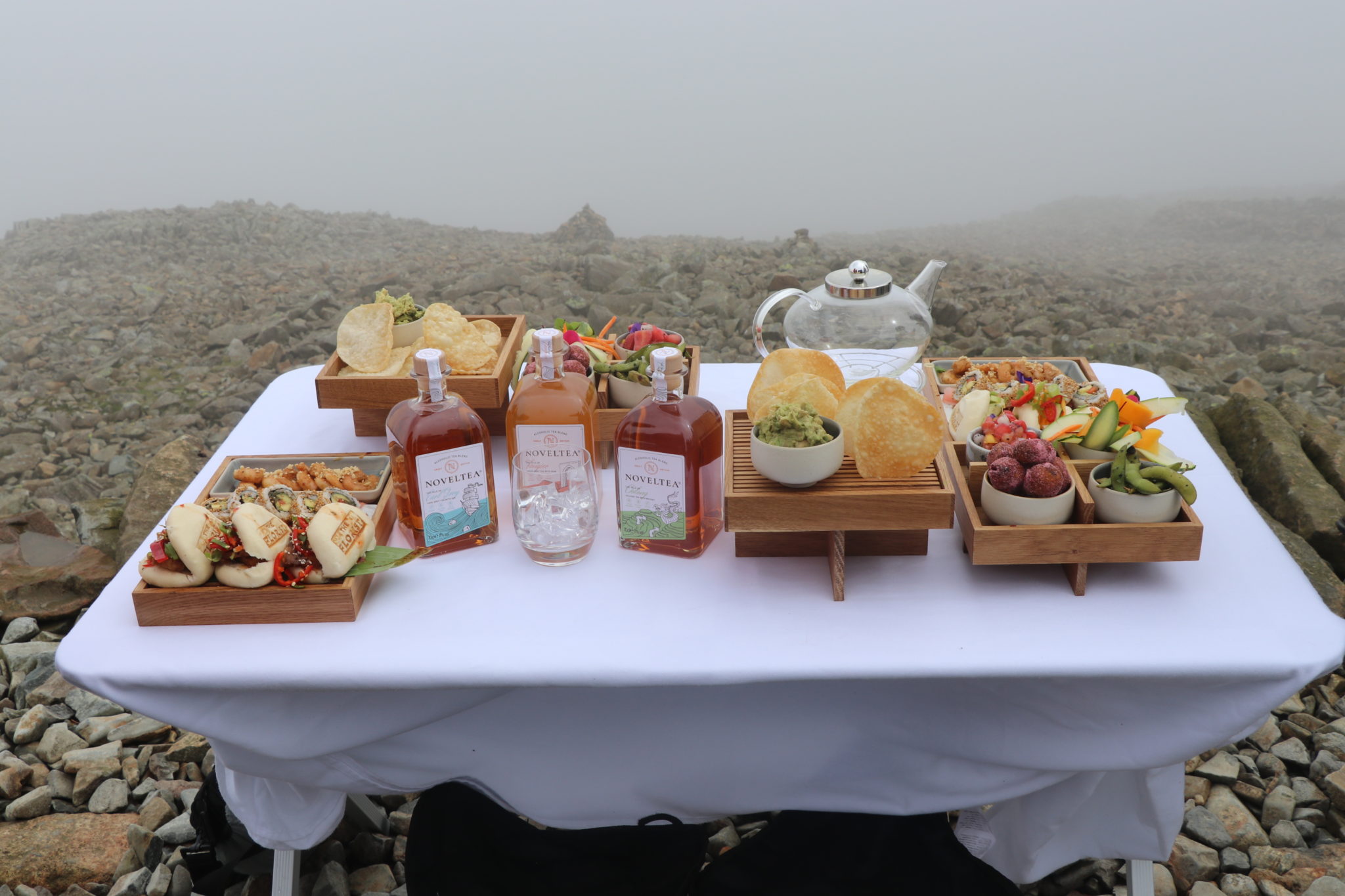 Often, people get confused between afternoon tea and high tea.  I took part in the world’s highest high tea experience, and it’s important to note the difference!

The main difference between the two stems from the class of the guests.  As mentioned, afternoon tea was largely a social event for the upper class throughout the 19th century.  They would sip tea and nibble sandwiches in the mid-afternoon before dinner.  The lower classes, were still out working and when they returned home in the evening, required a more substantial tea.  High Tea therefore includes heavier dishes such as meat, pies, and vegetables.

What did I get up to?

I was invited on a press trip to the Lake District, where I partnered up with NOVELTEA and The Florist to hike England’s tallest mountain Scafell Pike, for the highest high tea in the world (and a very classy one at that!).

We arrived early to begin our 3-hour ascent to the summit, where we were led by professional guides.  It was rainy and incredibly foggy, so visibility was poor, and I was a little concerned of how much I’d enjoy it.  Surprisingly, having poor weather conditions actually made the hike easier, as you were completely focused on the walk, and the cool conditions made it more enjoyable. 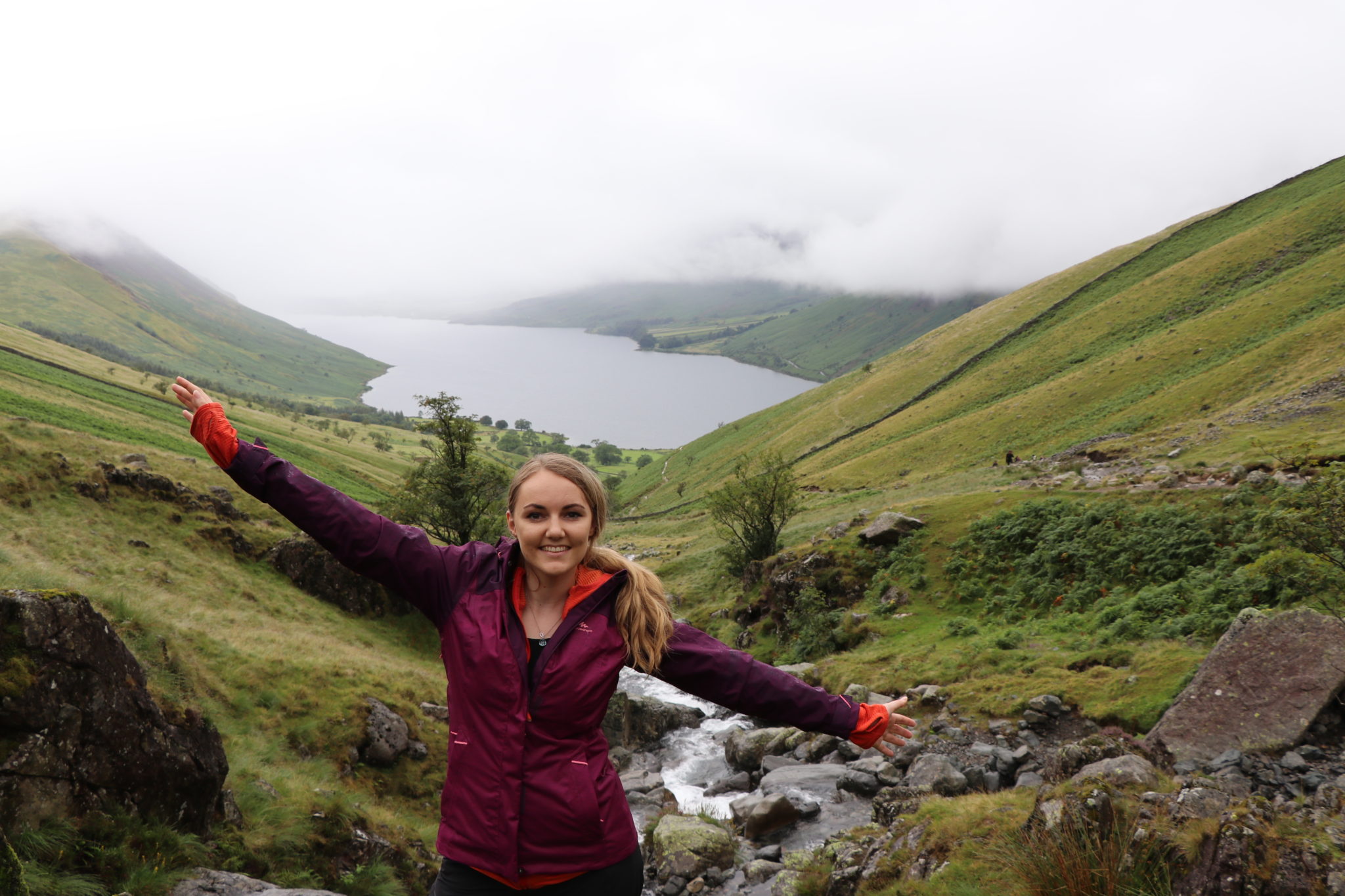 I’ve hiked a fair amount, including a volcano in Guatemala, and I have to say hiking Scafell Pike was one of the most difficult hikes I have completed.  There are a few really steep sections, where it’s more like climbing stairs, but I kept thinking of the workout I was getting, and the amazing high tea waiting for me at the top.

Once we reached the summit, there was a huge sense of achievement felt amongst the group.  We had made it! Now we could sit back, enjoy our much-anticipated high tea and smash a world record while we were at it.  Turns out, the 978m ascent surpassed the current world record held by the Burj Khalifa at 584.5m, meaning we are officially world record holders! 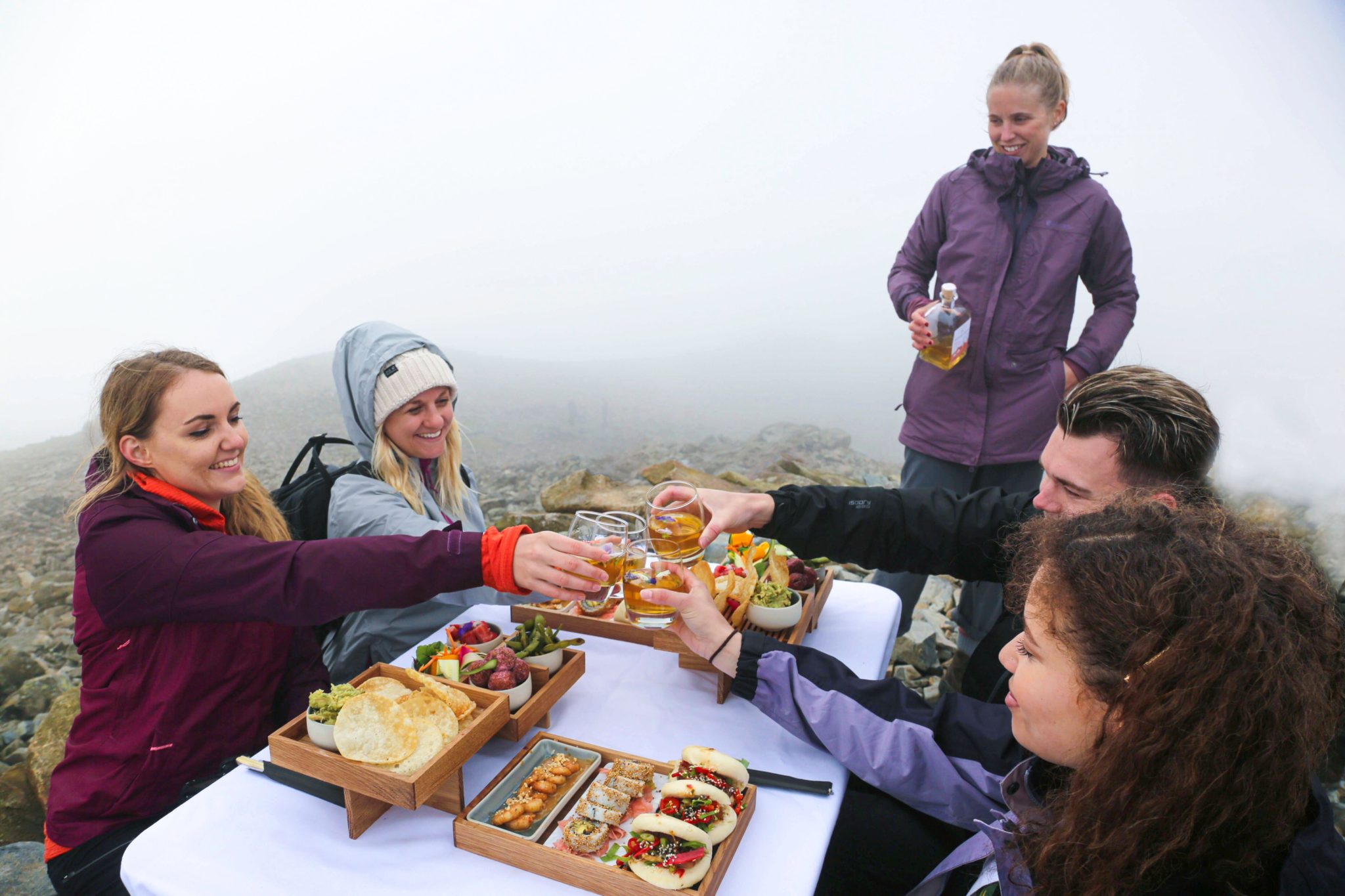 The amazing folk at The Florist and NOVELTEA set out the table and chairs, and a personal chef cooked us our food. The tea was inspired by Ikebana, the Japanese art of flower arranging, and included bao buns, sushi, and Nutella doughnuts.

The food was paired with three different types of NOVELTEA, each designed to take you on a journey around the world.  They included: Oolong Tea and Whisky, Tangier Tea with Rum, and Earl Grey Tea with Gin. The tastes are inspired by the cultures and heritage associated with the origin of the tea. 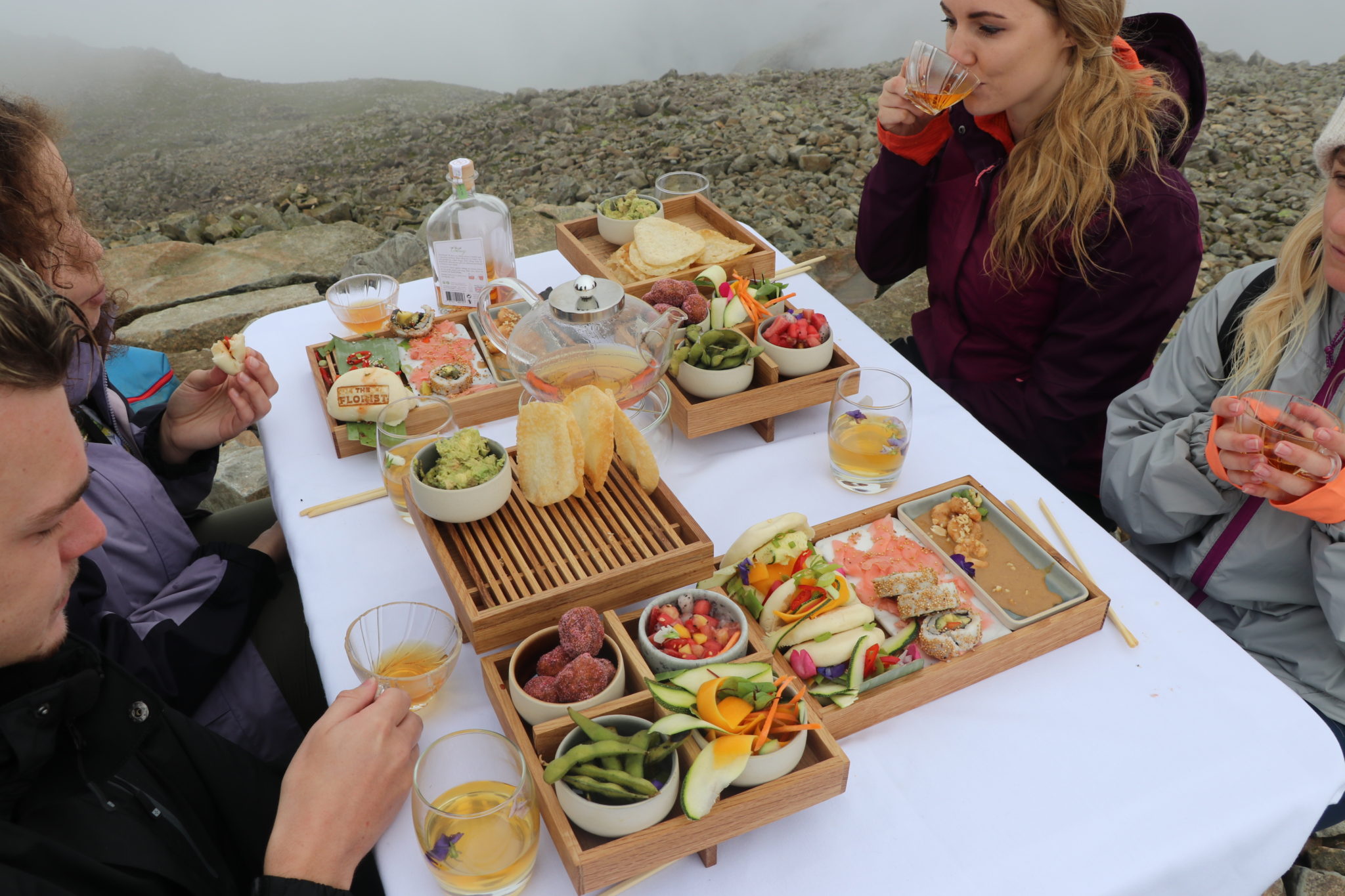 It is great to see brands becoming more experimental with afternoon tea, and amazing to inject some adventure into the British tradition.  It was definitely one of the most memorable high tea experiences I have and probably will ever have had. 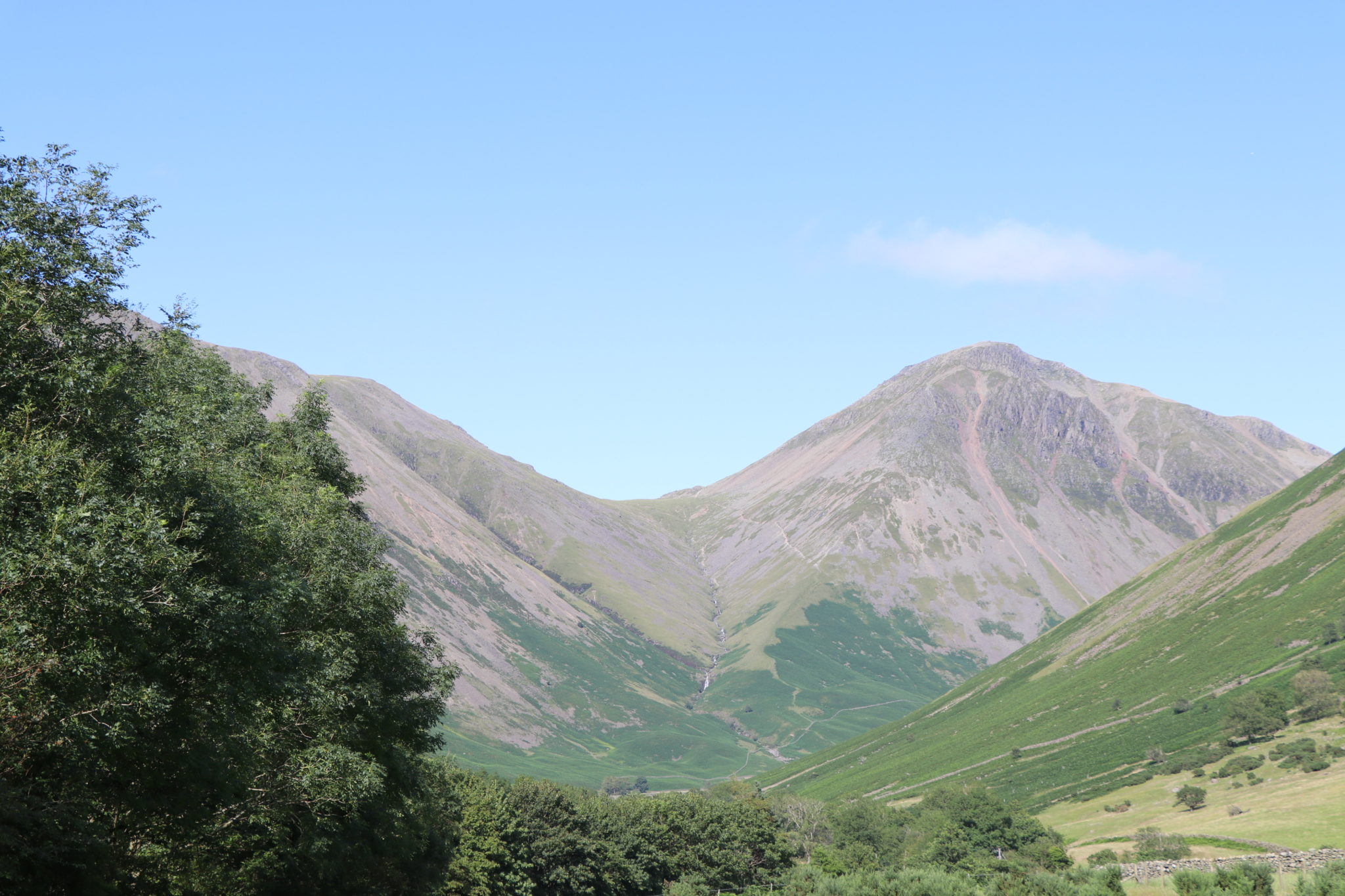 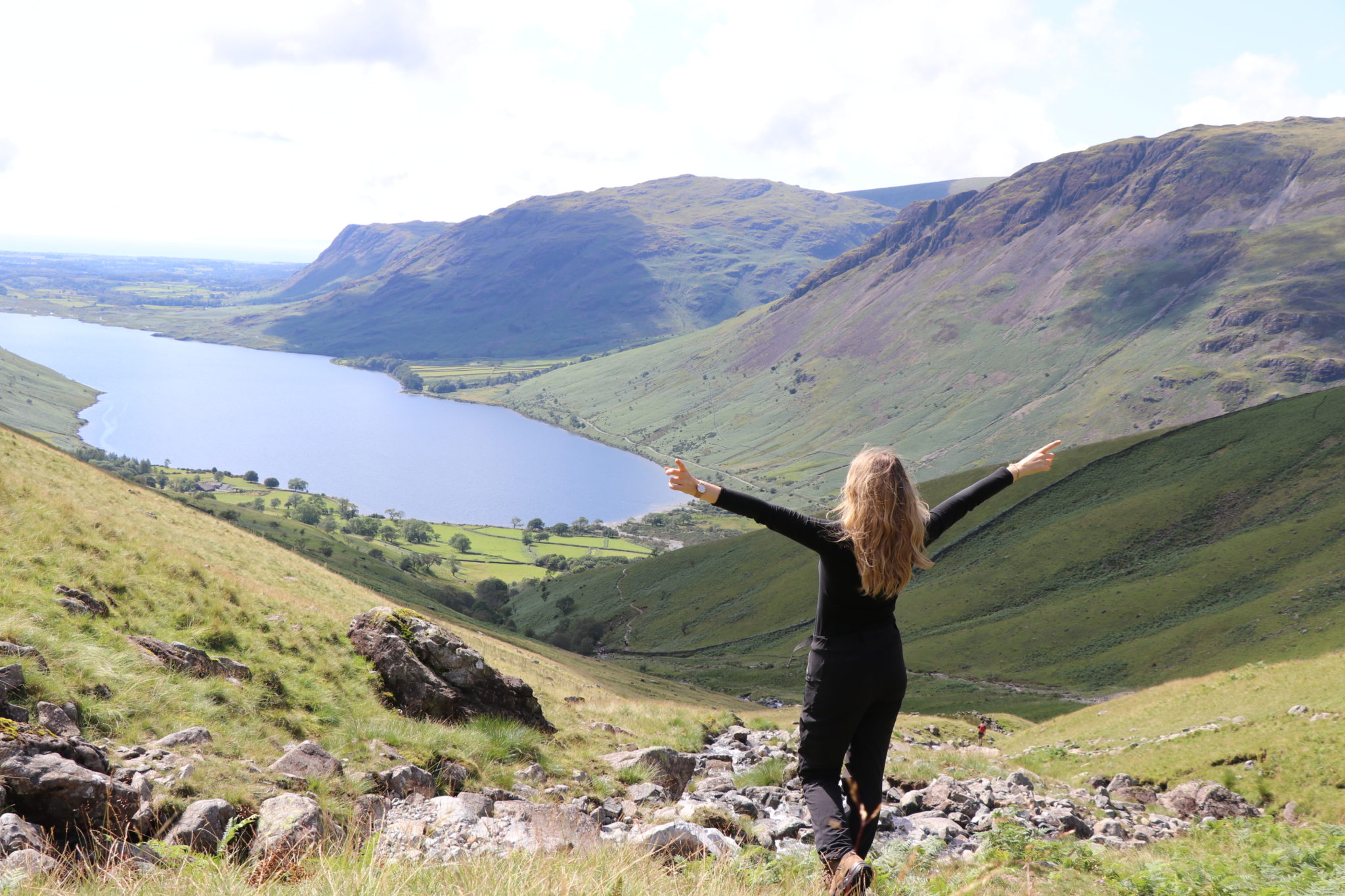 As we made our way back down, the weather had completely cleared and the sun had come out, meaning we had stunning views of the surrounding mountains and valleys. It was so beautiful, we ended up stopping for a tea break on one of the hillsides, overlooking a gorgeous lake. It was the perfect way to end such an incredible experience.

Who are The Florist and NOVELTEA?

NOVELTEA was founded by German expats Lukas Passia and Vincent Efferoth after they moved to Newcastle and noticed the Brits’ love of tea and alcohol.  They decide to combine the two for an alcoholic afternoon tea and created NOVELTEA; the first ever cold-brewed tea that is infused with spirit. Their blends take inspiration from its ingredients and origins around the world, to create unique flavours that can be enjoyed hot or cold. 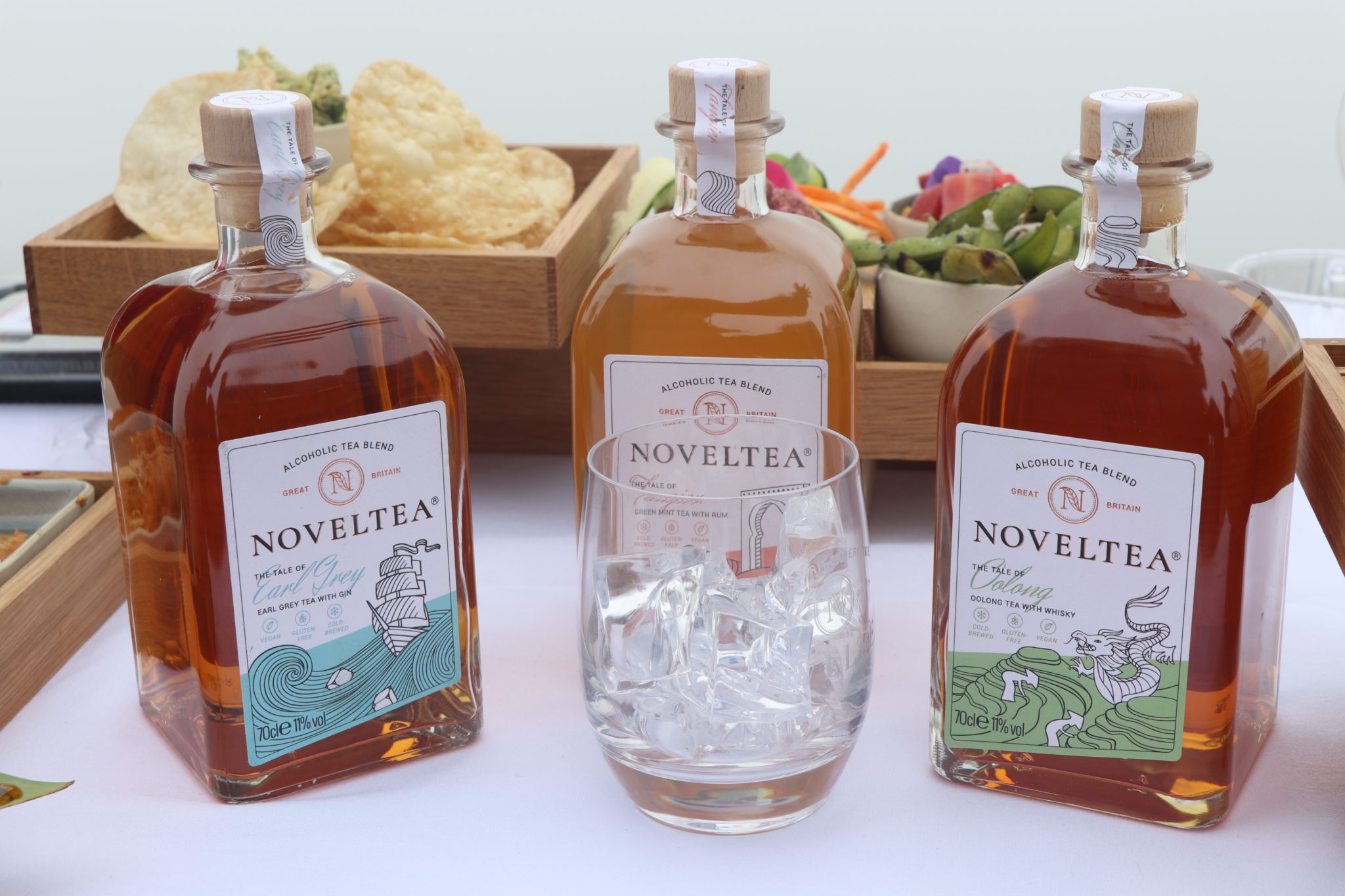 You may remember NOVELTEA from Dragons Den in 2018, where they received offers from three out of the four dragons.  The duo decided to turn down all three dragons as they wanted too high a stake of the business, and decided to make it on their own. They completed a crowdfunding campaign which raised £342,000 for 9% giving the firm a valuation of around £3.8m

They now have a very successful brand and are ranked as one of the top new businesses in the UK. 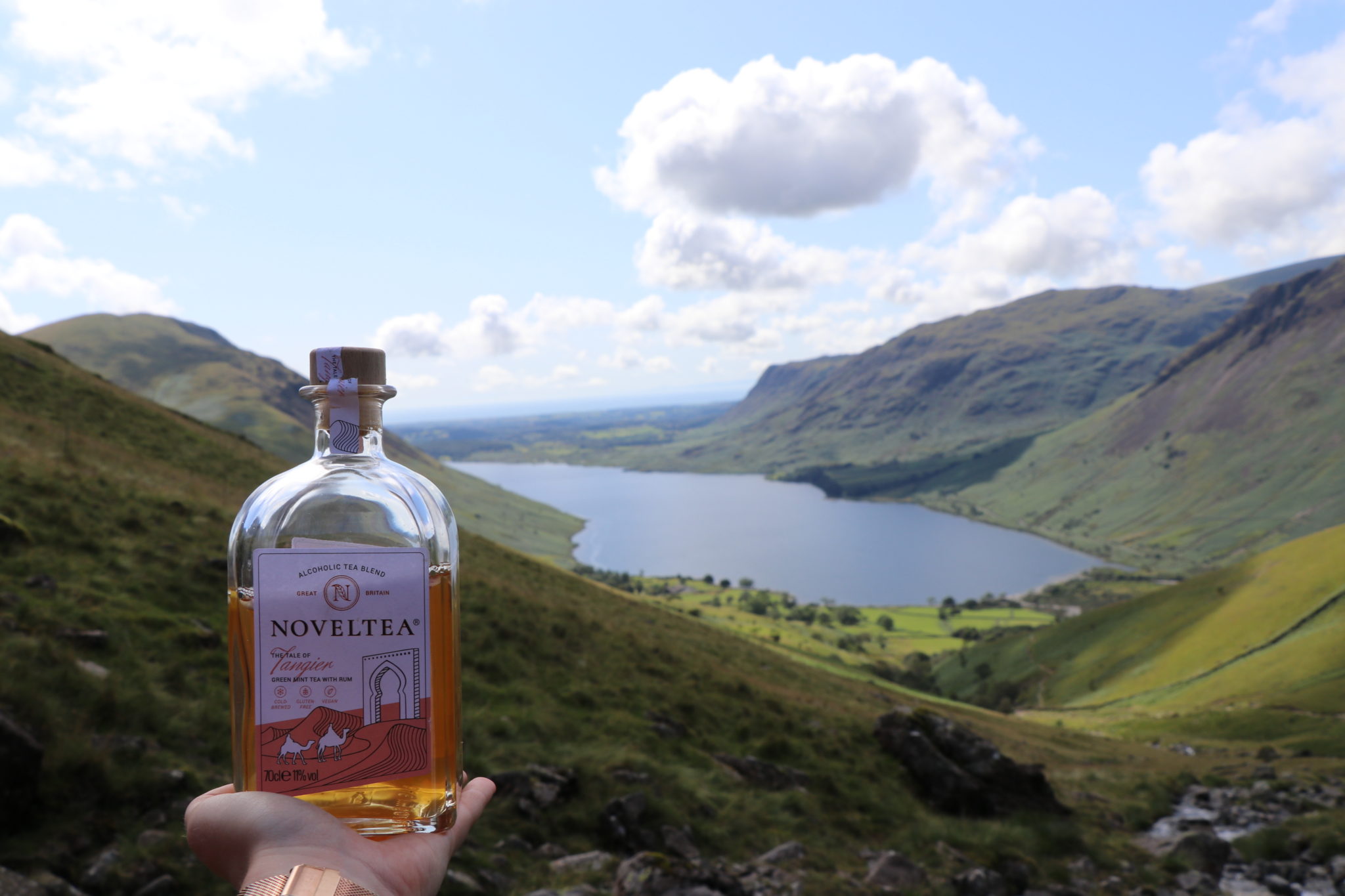 The Florist is a contemporary bar and restaurant, with venues in Bristol, Watford and Liverpool, that features beautiful and incredibly ‘Instagram-able’ floral installations.  They have a vibrant food and cocktail menu, as well as a sophisticated party atmosphere with DJ’s and saxophonists. Vegans, dairy-free, gluten-free and meat eaters can all dine in one place as The Florist’s expansive menu caters for all – from breakfast to brunch, lunch, dinner and Sunday lunch, too. 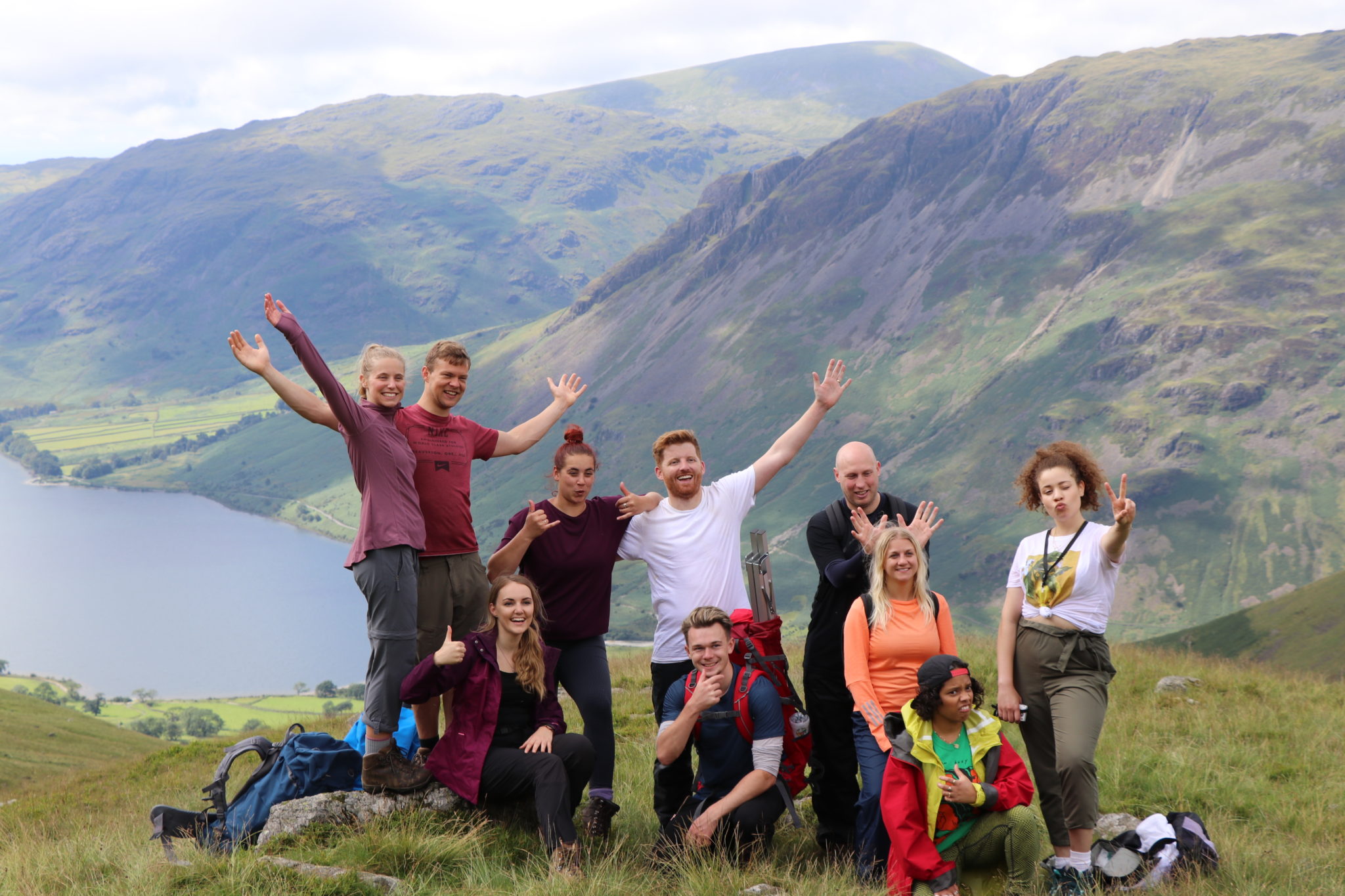 The Florist’s new high tea is now officially open in their Watford and Bristol branches, and is available to book Monday to Friday (12pm -5pm) and Saturday (12pm-4pm) and is priced at £25 per person.  It comes with a choice of one of three NOVELTEA cocktails, with vegan and vegetarian options available upon request. 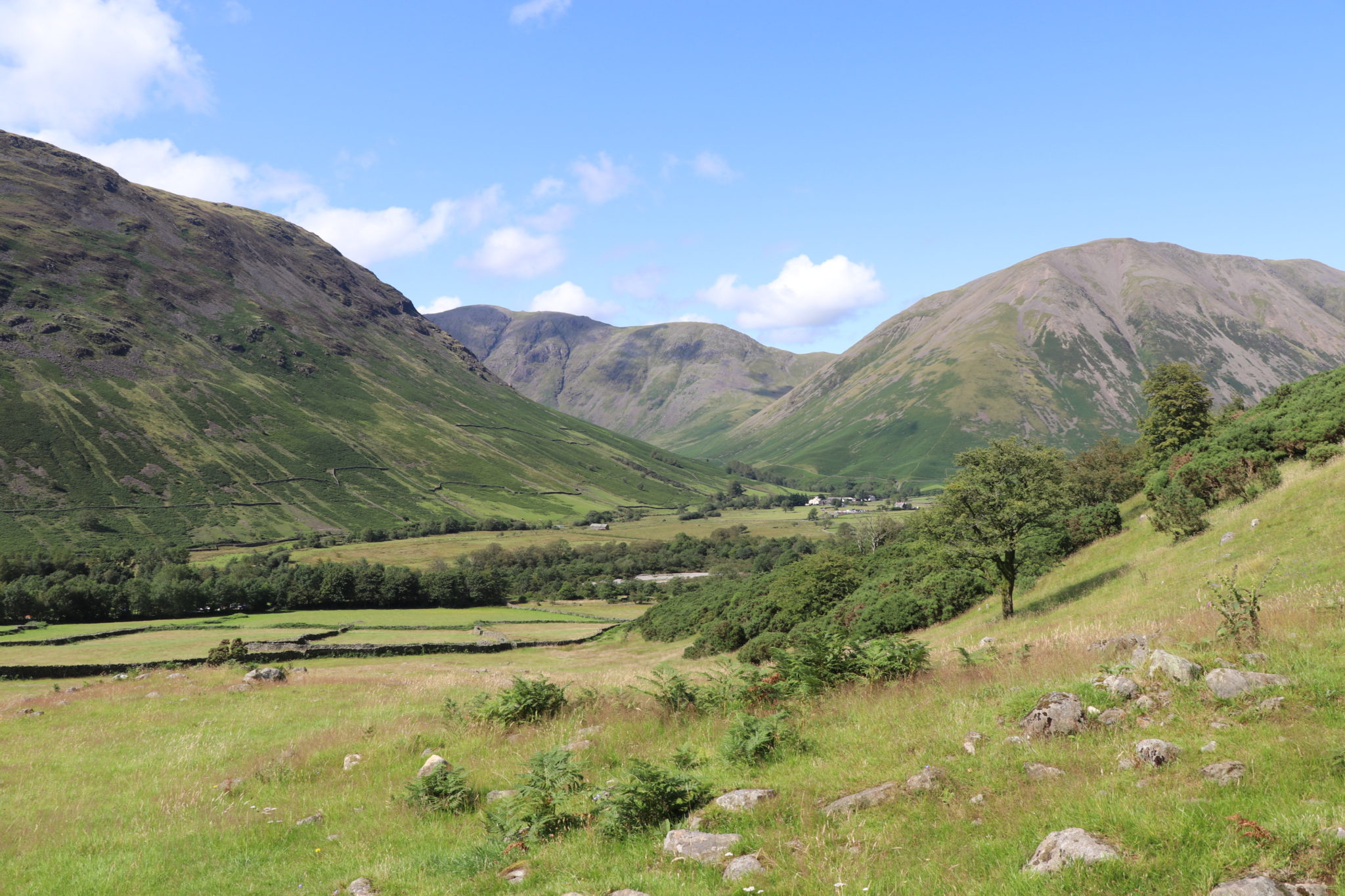 Thank you again to The Florist, NOVELTEA, and ThreeMotion for an amazing experience.

Disclaimer*
This was a fully funded press trip to the Lake District with all expenses included. Views are my own.